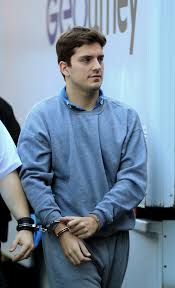 You might recall a few years ago, an article in the press and on the national news about a man from Edinburgh who infected numerous gay men with HIV over an extended period of time.  His crimes mainly happened in Edinburgh, Brighton and Newcastle and he had contacted me on a number of occasions in May 2015 to make an appointment.

Daryll Rowe appeared out of nowhere and started chatting to me on my sex worker twitter account @stevegayescort and yes he was chatty, charming and quite witty.  He had a cat and he would share pictures of her and check in with me most days during that month.  On various occasions during that month he made a number of enquiries with me about an appointment, usually by direct message, telling me he might come down Friday after work for a few hours, or he would ask what was I doing on Sunday.  Just general chitty chat things.  Nothing was untoward about him but there were pictures on his account of him having unprotected anal sex with other men.  This is none of my business and there is no guarantee that anyone’s pictures are genuine.  The amount of times I have seen my pictures online or been told they’re on Grindr is enough to come to that conclusion.  People nick pictures and pass them off as themselves.

Late May 2015 he posted a picture of his cat, I liked it and then didn’t hear anything more from him.  He had said once again he might come and visit me on Sunday.  Looking back, he also asked loads and loads of questions about escort work.  He would ask what I did with clients, how much I could expect to earn each month, what sort of men I would normally see.  I never thought much of it at the time until last weekend.  Anyway, I went online to message him about the Sunday and noticed he was no longer following me, so I couldn’t send him a direct message but also noticed that the 200 odd people he was following had all gone.  He had unfollowed everyone.  Oh well the end of an era and I never gave him another thought.

I became aware of an ongoing trial about a man who had infected other men, on purpose with HIV, I had read about it but to be honest I didn’t take very much notice of it, if any.  It was just something on the news and I kept thinking how awful it must have been for those men.

A chance conversation with a friend in the pub brought up Daryll Rowe, this was by someone who knows that I have sexual liaisons with men for money.  He asked me if I got regularly tested and I said yes and he said, oh “that guy was arrested in the Northumbria Police area somewhere, he was a good looking 27 year old hairdresser from Edinburgh who went on the run to Brighton in the summer of 2015 and a year later was found nearby here after infecting a lot of men“.  I felt sick, I got my phone and googled him.  I did not associate Edinburgh with this guy, all I knew from the bits of news snippets I seen on TV and online was that a guy in Brighton made accusations about him to the police.  It didn’t register with me that it could be the same person.

I posted about my findings on my twitter account at the time and my followers were quite shocked.  The man on twitter, who never gave a name to me was Daryll Rowe.  I don’t usually ask anyone’s name but I had pictures of him.  The police reports said that in April 2015 he found out he was HIV positive and immediately started infecting men on purpose.  He opened his twitter account in May 2015 and immediately targeted me, disappearing in late May when he knew complaints were being made about him in Scotland.  Please keep this paragraph in mind for later on in this story.

Last weekend, I was was online chatting to a lady I follow called Darcy and we got chatting about the Terrence Higgins Trust and I was saying how I felt they were an irresponsible organisation and she mentioned a documentary on the BBC about a man in Edinburgh who had infected many many many men over the course of two years.  I said to her “he wasn’t good looking, 28 and a hairdresser by any chance”.  Yes that’s him, she said………  She then mentioned he was caught in Newcastle, which I knew about but what I didn’t know about was the next bit.  When he was caught, he was advertising on an escort website for clients and the police had been scouring escort adverts looking for him, they obviously must have known that he was doing some sort of escort work and ….bingo ….. they found him.  He was living with a vulnerable man under an assumed name of Gary Cole somewhere in and around Newcastle.  I did not know about the escort connection until last weekend.  Again I was shocked.

Looking back to May 2015, Daryll asked me on a number of occasions if I lived with anyone or worked with another escort.  I now believe that he was planning a move to Newcastle and was trying to groom me for somewhere to stay or he was trying to work out how many men he could infect and be paid for the privilege.  He asked a lot of questions about escort work, how close I was to the city, how many clients I could expect and 12 months later, guess what he was doing in and around Newcastle.  It now worries me about how many men he could have infected here never mind anywhere else.

Seeing my post last weekend, an acquaintance of mine who used to be an escort in Newcastle and now lives in London sent me a message.  He too had been contacted by Daryll whilst he was actively trying to infect men.  It didn’t go anywhere between them either.  We were both lucky.

Daryll is now in prison on a life sentence with a minimum term of 12 years.  He’s got another 10 years to go

I have spoken to my liaison officer at Northumbria Police today (yes the police are lovely with sex workers) and if you have had intimate contact with Daryll Rowe please call 101 and ask for Northumbria Police or your own local force, but Northumbria have been made aware of this again over the last few days.  If you feel that you need to speak to an officer without contacting them directly or you are nervous about doing so then please email me at steve@steveescort.co.uk and I will pass your details onto a trusted police officer who will speak to you directly.

Please take the time to read the online documentary about it and the full documentary is available on the BBC iPlayer.  If you think you have been in contact with Daryll in Newcastle or anywhere else for that matter please contact your nearest sexual health clinic and inform the police.  There are sure to be many more cases out there.