When Did The Sunday Times Become The News Of The World ?

That article last Sunday, the one where the Sunday Times decided it wanted to be the News Of The World for ONLY one day 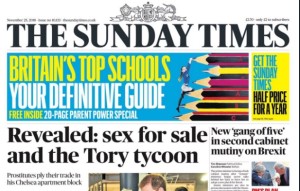 Yes, that one, the one that had “sex for sale” in the title.  Was this really becoming of a broadsheet, did the public really need to know about working girls in a Chelsea apartment block when they strolled down to the newsagents at 8.50am last Sunday morning.

I subscribe to the Sunday Times, I am on a legacy account that you can’t purchase anymore and pay £8.67 a month to the paper for a printed copy of the Sunday Times and web access to the Times every other day of the week.  I have always found their reporting to be an invaluable contribution to the British media and with over 500,000 subscribers the newspaper seem to have found a niche market by successfully combining a digital and physical paper subscription deal that appeals to the public.  Everytime I pick up a copy at the newsagents, I know that I am paying 70p less than the face value and I have always considered my subscription, supporting this centuries old newspaper to be money well spent, until last Sunday.

Working in the sex industry, I was appalled to discover that a story designed to damage Christopher Moran, actually damaged the livelihood of ordinary people who were simply working as an escort in an apartment block.  There are girls and guys working from almost every posh tower block the length and breadth of the country.  In Newcastle a few years ago it was reported that the Quayside area of the city was known locally as The Baltic Brothel, girls operating from tower blocks, serviced apartments and hotel rooms is old news but what concerned me more about this article was that the reporter implied that these sex workers were trafficked from Romania.  There’s no proof to back up this claim apart from “a parliamentary report on the sex trade identified Romania as the biggest problem country for victims of sexual exploitation coming to the UK“.  Romania, I may add is in the European Union and many, if not all of these ladies could have entered the United Kingdom legally under Freedom of Movement. If the article mentioned Ukraine, Albania or Azerbaijan as the country of origin I could have maybe accepted some of that argument but to use a country, where nationals are legally entitled to settle in London was a bit of a strange one to use and to subsequently suggest that they were trafficked.  In the decade and a half that I have been involved in sex work I have never met a single person nor been told about a single person who has been trafficked.

The article went on to state that “Kevin Hyland, the former UK anti-slavery commissioner, said there had been “previous cases of [suspected] trafficking linked to Chelsea Cloisters”.  This may be the case but suspected isn’t fact, it’s just suspected, yet this entire expose was dressed up as fact.

The rhetoric in the article got worse, the apartment block was referred to as “Sodom and Gomorrah” and “The infamous 10 floors of whores”, hats off to them for 10 Floors of Whores, that’s one I won’t forget in a hurry but neither will be genuine people who have bought apartments there as this sensationalist reporting may have cost them a property sale.  It was quite obvious that the reporter just didn’t care for the people used as pawns in a story designed to embarrass Mr Moran or the Conservative Party.  I was appalled to read that The Sunday Times had been able to make “40 bookings with prostitutes using 23 apartments in the building — 15 of them in flats rented from Moran’s company”.  Did they cancel each booking, did they turn up and have the appointment and a bit of fun along the way or did they No Show. No show appointments unnerve all sex workers, especially when they have obtained your home address and if they were no shows then it’s an appalling way to treat people who are only trying to make a living.  Every no show can cost an escort a lot of money because if the reporter rang the escort or agency at 11am and then booked an hour with an escort for 2pm, the escort or agency could have easily turned down other people for the time slot, therefore missing out on a genuine appointment.

This article made me question the integrity of a so called respected broadsheet newspaper, it’s made me consider cancelling my subscription and I have been appalled at the salacious reporting style used on their front page, implying that the ladies in the apartment block could have been trafficked and implying that this gentleman benefited from their lifestyle.  If you’re going to use that argument then you could easily argue that Durex, KY, Ann Summers and the make up counter at Boots also benefit from escorting, because we need their products as well as the rental of an apartment, to conduct and ply our trade (as the Sunday Times sees it).

This was disgraceful reporting at it’s very worst and I do not wish to see a repeat of this on their front page.  Those ladies were not breaking the law, neither were the landlords of the apartments.  One thing I was told many years ago by the police was “It’s not illegal to work from your own or your rented apartment and you can have as many visitors in a day as you like”

2 responses to “When Did The Sunday Times Become The News Of The World ?”